BOOK NERD : Kickass Quotes from The Signature Of All Things by Elizabeth Gilbert 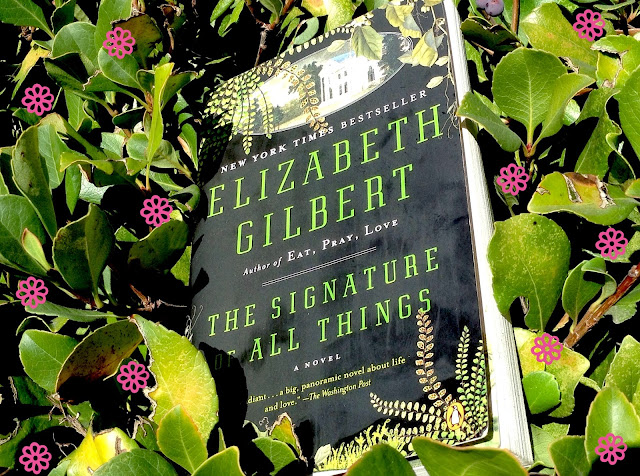 I'm in the mood to do something different this week, a small but delightful diversion from the usual BOOK NERD WEEKLY format.

So- instead of 15 - 18 bite-sized inspirational quotes, I would like to present you with a few passages from The Signature Of All Things by Elizabeth Gilbert, which I tearfully finished reading this past Saturday.

And- before you get too excited- The Signature Of All Things is NOT a sequel to Eat Pray Love. In fact, besides their mutual charm & keen observation, the two could not be more different.

Eat Pray Love was a memoir and this is distinctly fiction, although, to me, it felt more like biography that reads like fiction.

Eat Pray Love was buoyant and witty. This is much more reserved, as befitting the times portrayed, but also deeply fascinating.

You will learn things that you didn't even know you wanted to learn, if you read this book.

I also became so attached to the story's central character, Alma Whittaker, and entirely convinced that she was real- she just had to be real(!)- that I needed to remind myself that- No... Cool your jets... Elizabeth Gilbert made her up...

How she did this is beyond me. Clearly it involves some kind of magickal genius and, as Ms. Gilbert herself will attest, years of research.


It is, to my mind, one of the greatest works of fiction created in our time. It is big, and it spans one woman's full, richly complex life from birth to death.

The fact that I felt a sense of accomplishment in reading it's final page is laughable considering what Elizabeth must have felt in writing it.

★ "Alma wrote quickly and copiously. She did not slow down to revise, but would simply tear up old drafts and begin again from scratch, nearly everyday. She could not slow her pace; she was not interested in slowing her pace. Like a besotted drunk- who can run without falling, but who cannot walk without falling- Alma could only propel herself through her idea with blind speed. She was afraid to slow down and write more carefully, for she feared she might tumble over, lose her nerve, or worse!- lose her idea." -Elizabeth Gilbert 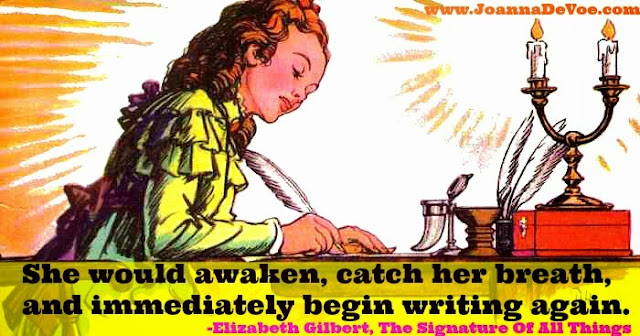 ★ "In her ninth summer, completely on her own, Alma learned to tell time by the opening and closing of flowers. At five o'clock in the morning, she noticed, the goatsbeard petals always unfolded. At six o'clock, the daisies and globeflowers opened. When the clock struck seven, the dandelions would bloom. At eight o'clock, it was the scarlet pimpernel's turn. Nine o'clock: chickweed. Ten o'clock: meadow saffron. By eleven o'clock, the process began to reverse. At noon, the goatsbeard closed. At one o'clock the chickweed closed. By three o'clock, the dandelions had folded. If Alma was not back to the house with her hands washed by five o'clock- when the globeflower closed and the evening primrose began to open- she would find herself in trouble." -Elizabeth Gilbert

★ "Alma loved botany, more by the day. It was not so much the beauty of plants that compelled her as their magical orderliness. Alma was a girl possessed by soaring enthusiasm for systems, sequence, pigeonholing, and indexes; botany provided ample opportunity to indulge in all these pleasures. She appreciated how, once you had put a plant into the correct taxonomical order, it stayed in order. There were serious mathematical rules inherent in the symmetry of plants, too, and Alma found serenity and reverence in these rules. In every species, for instance, there is a fixed ratio between the teeth of the calyx and the divisions of the corolla, and that ratio never changes. One could set one's clock to it. It was an abiding, comforting, unfaltering law." -Elizabeth Gilbert

★ "He argued that nothing was more important than the investigation of that which appeared to defy the rules of nature, for who were we to claim that we understood the rules of nature? Everything was a miracle until we solved it. Wallace wrote that the first man who ever saw a flying fish probably thought he was witnessing a miracle- and the first man who ever described a flying fish was doubtless called a liar." -Elizabeth Gilbert

★ "Her first reaction upon entering this miraculous place was to shut her eyes against the beauty. It was unendurable. She felt as though this were something she should not be allowed to see without permission, without some sort of religious dispensation. She felt undeserving. With her eyes closed, she relaxed and allowed herself to believe that she had dreamed this vision. When she dared open them again, however, it was all still there." -Elizabeth Gilbert 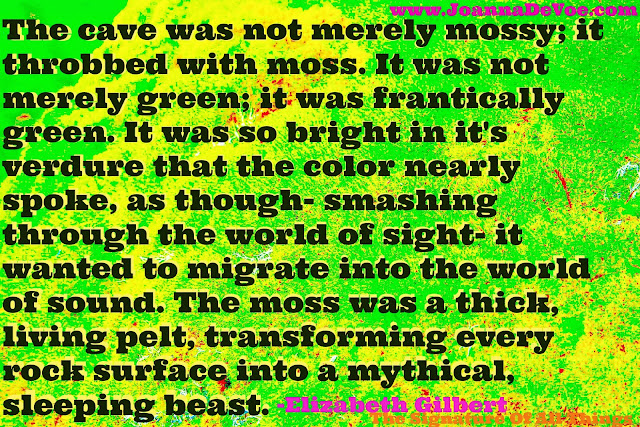 ★ "In every way mosses could seem plain, dull, modest, even primitive. The simplest weed sprouting from the humblest city sidewalk appeared infinitely more sophisticated by comparison. But here is what few people understood, and what Alma came to learn: Moss is inconceivably strong. Moss eats stone; scarcely anything, in return, eats moss. Moss dines upon boulders, slowly but devastatingly, in a meal that lasts for centuries. Given enough time, a colony of moss can turn a cliff into gravel, and turn that gravel into topsoil." -Elizabeth Gilbert

★ "She was not afraid of death, in theory. If anything, she had nothing but respect and reverence for the Genius of Death, who had shaped this world more than any other force." -Elizabeth Gilbert 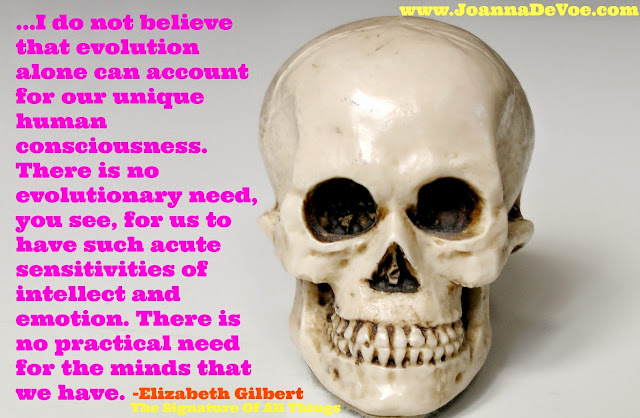 ★ "...I had never mentioned the word God... The only thing I'd said was that a supreme intelligence exists in the universe, and that it longs for union with us. I believe in the world of spirits... but I would never bring the word God into a scientific discussion." -Elizabeth Gilbert

★ "The trick at every turn was to endure the test of living for as long as possible. The odds of survival were punishingly slim, for the world was naught but a school of calamity and an endless burning furnace of tribulation. But those who survived the world shaped it- even as the world, simultaneously, shaped them." -Elizabeth Gilbert