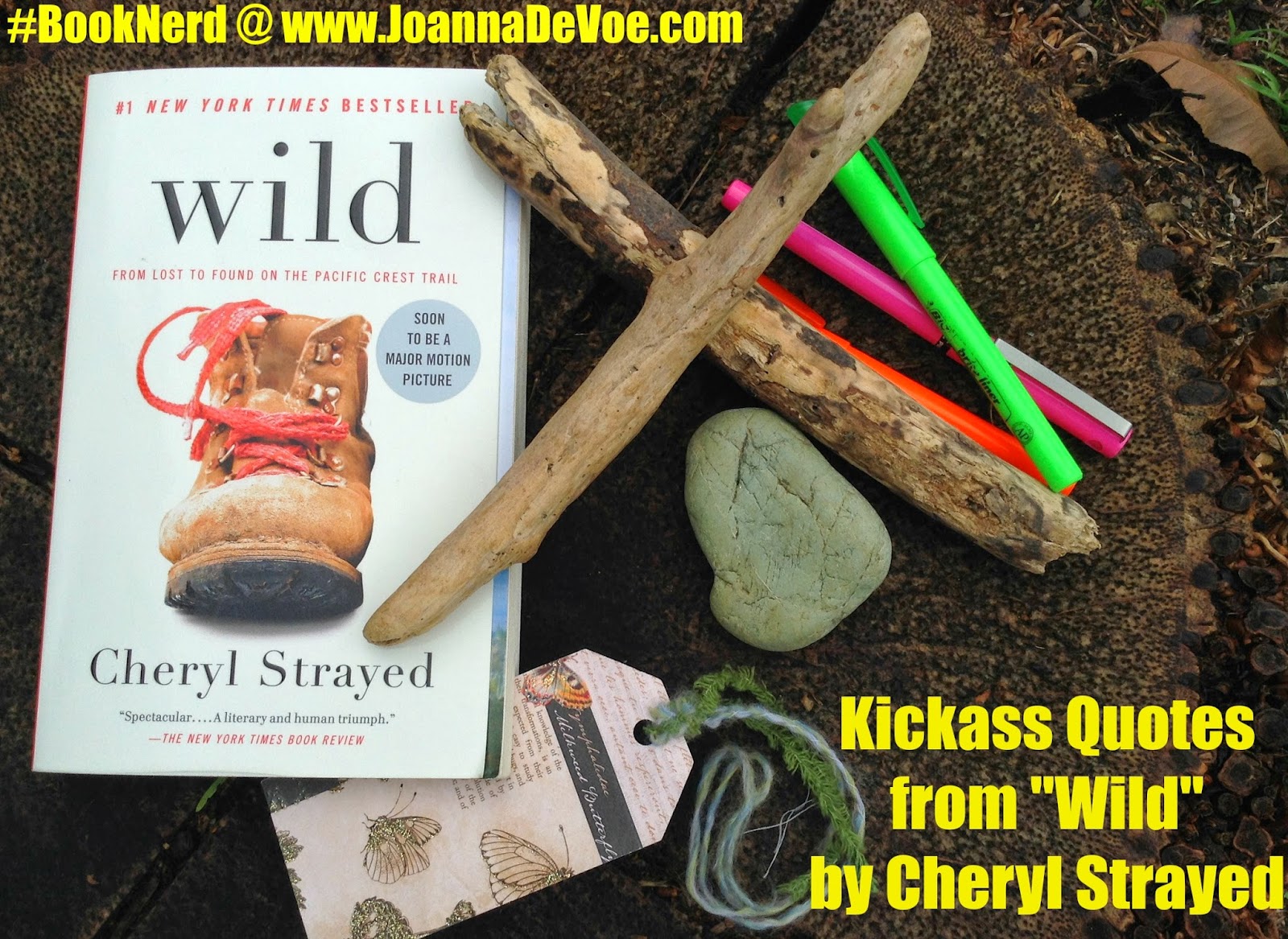 What makes someone take an awkward running leap into the unknown?

Why would anyone journey into the wild so utterly unprepared and blind to what lies ahead?

In the case of Cheryl Strayed's more than 1,100 mile solo hike up the Pacific Crest Trail, I'd say- all of the above. That and a whole lot of courage.

Strayed documented that experience in her best-selling novel, Wild, which is no doubt on your radar now that it has been made into a major motion picture starring one of America's favorite leading ladies.

It first popped onto my radar when Oprah announced it as one of her Book Club 2.0 selections, but it wasn't until the movie was about to debut that I finally picked it up to read.

Cheryl's experience hiking the Pacific Crest Trail alone for 93 days, blisters, lost toenails & rattlesnakes be damned, is a fantastic metaphor for life and a fine example of what us tarot enthusiasts like to refer to as The Fool's Journey.

The Fool's Journey is NOT about waiting until conditions are perfect or until you have a certain sense of preparedness to begin.

It's about beginning in blissful ignorance, growing as you move along, challenge after challenge, fear after fear, putting one foot in front of the other, no matter the obstacles, and persisting to the end.

What Cheryl did was live this process out in the most raw, literal way.

She first stepped onto the PCT in too tight shoes, carrying an over-stuffed pack and a burdensome case of regret and wound up facing all manner of rough terrain, from barren desert to icy cliffs and everything in between, including her own haunted memories.

Her journey also demonstrates the full range of feeling that one must traverse in order to survive the grieving process. Losing one's mother, at any age, is no small thing. It changes you. Permanently. And- in many small ways...

Cheryl started her journey a sexually promiscuous, heroin-shooting, lost soul of a girl and emerged the strong, accomplished woman who was finally capable of writing this book.

It is a very good book.

And- that is why, I am pleased to share a few snippets from it here now. I hope they will inspire you to step out into your own life with a renewed sense of courage...

★ "I almost choked to death on what I knew before I knew." -Cheryl Strayed

★ "...at long last, there was the actual doing it, quickly followed by the grim realization of what it meant to do it, followed by the decision to quit doing it because doing it was absurd and pointless and ridiculously difficult and far more than I expected doing it would be and I was profoundly unprepared to do it. And then there was the real live truly doing it. The staying and doing it, in spite of everything." -Cheryl Strayed

★ "I knew that if I allowed fear to overtake me, my journey was doomed. Fear, to a great extent, is born of a story we tell ourselves, and so I chose to tell myself a different story from the one women are told. I decided I was safe. I was strong. I was brave... I simply did not let myself become afraid. Fear begets fear. Power begets power. I willed myself to beget power. And it wasn't long before I actually wasn't afraid." -Cheryl Strayed

★ "I'm not afraid, I reminded myself as I crawled into my tent without eating dinner, feeling too vulnerable outside, though I knew my tent offered little protection. I sat in expectant wonder and fear, bracing for a mighty storm that never came." -Cheryl Strayed

★ "Uncertain as I was as I pushed forward, I felt right in my pushing, as if the effort itself meant something. That perhaps being amidst the undesecrated beauty of the wilderness meant I too could be undesecrated, regardless of what I'd lost or what had been taken from me, regardless of the regrettable things I'd done to others or myself or the regrettable things that had been done to me. Of all the things I'd been skeptical about, I didn't feel skeptical about this: the wilderness had a clarity that included me." -Cheryl Strayed

★ "Wet and miserable as it was, the forest was magical- Gothic in it's green grandiosity, both luminous and dark, so lavish in it's fecundity that it looked surreal, as if I were walking through a fairy tale rather than the actual world." -Cheryl Strayed

★ "I loved getting lost in the rhythm of my steps and the click of my ski pole against the trail; the silence and the songs and sentences in my head." -Cheryl Strayed

★ "So much of being able to hike the PCT depended on mind control; the stout decision to move forward, regardless." -Cheryl Strayed 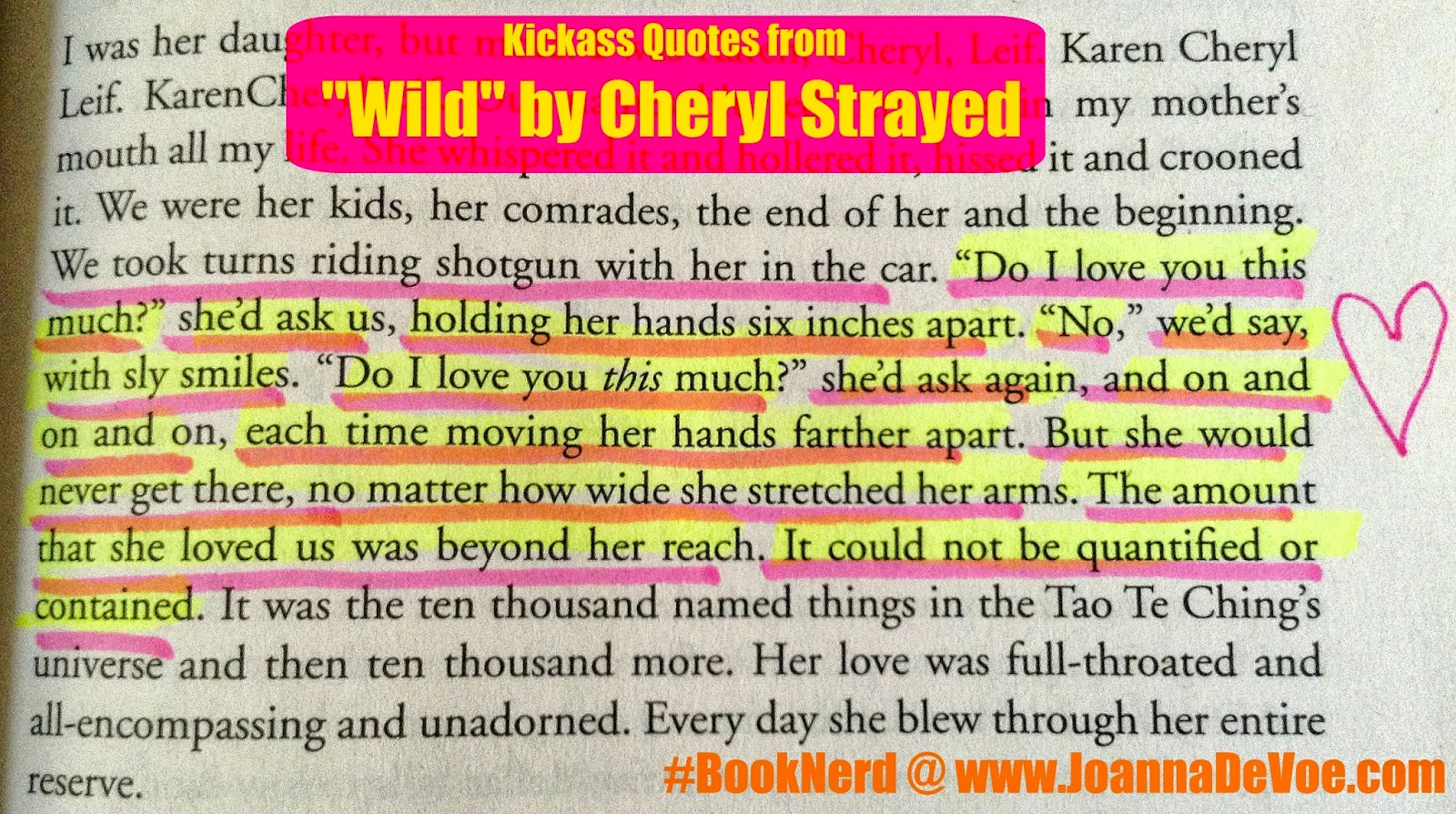 ★ "Much as I loved and admired my mother, I'd spent my childhood planning not to become her." -Cheryl Strayed

★ "She'd have been fifty that day, if she'd lived. She didn't live. She didn't get to be fifty. She would never be fifty, I told myself as I walked under the cold and bright August sun. Be fifty, Mom. Be fucking fifty, I thought with increasing rage as I forged on. I couldn't believe how furious I was at my mother for not being alive on her fiftieth birthday." -Cheryl Strayed

★ "When we finally laid down that tombstone and spread her ashes into the dirt, I hadn't spread them all. I'd kept a few of the largest chunks in my hand. I'd stood for a long while, not ready to release them to the earth. I didn't release them. I never ever would. I put her burnt bones into my mouth and swallowed them whole." -Cheryl Strayed

★ "The universe, I'd learned, was never, ever kidding. It would take whatever it wanted and it would never give it back." -Cheryl Strayed

★ "I drank beer that night near Obsidian Falls, which was named for the jet-black glass shards that wondrously cover the trail, making each step an ever-shifting clatter beneath me, as if I were walking across layers upon layers of broken china." -Cheryl Strayed

★ "Alone had always felt like an actual place to me, as if it weren't a state of being, but rather a room where I could retreat to be who I really was." -Cheryl Strayed

★ "I don't know how living outdoors and sleeping on the ground in a tent each night and walking alone through the wilderness all day almost every day had come to feel like my normal life, but it had." -Cheryl Strayed

★ "It was my life- like all lives, mysterious and irrevocable and sacred. So very close, so very present, so very belonging to me. How wild it was, to let it be." -Cheryl Strayed