BOOK NERD : Kickass Quotes from The Diary Of Anais Nin, Volume One 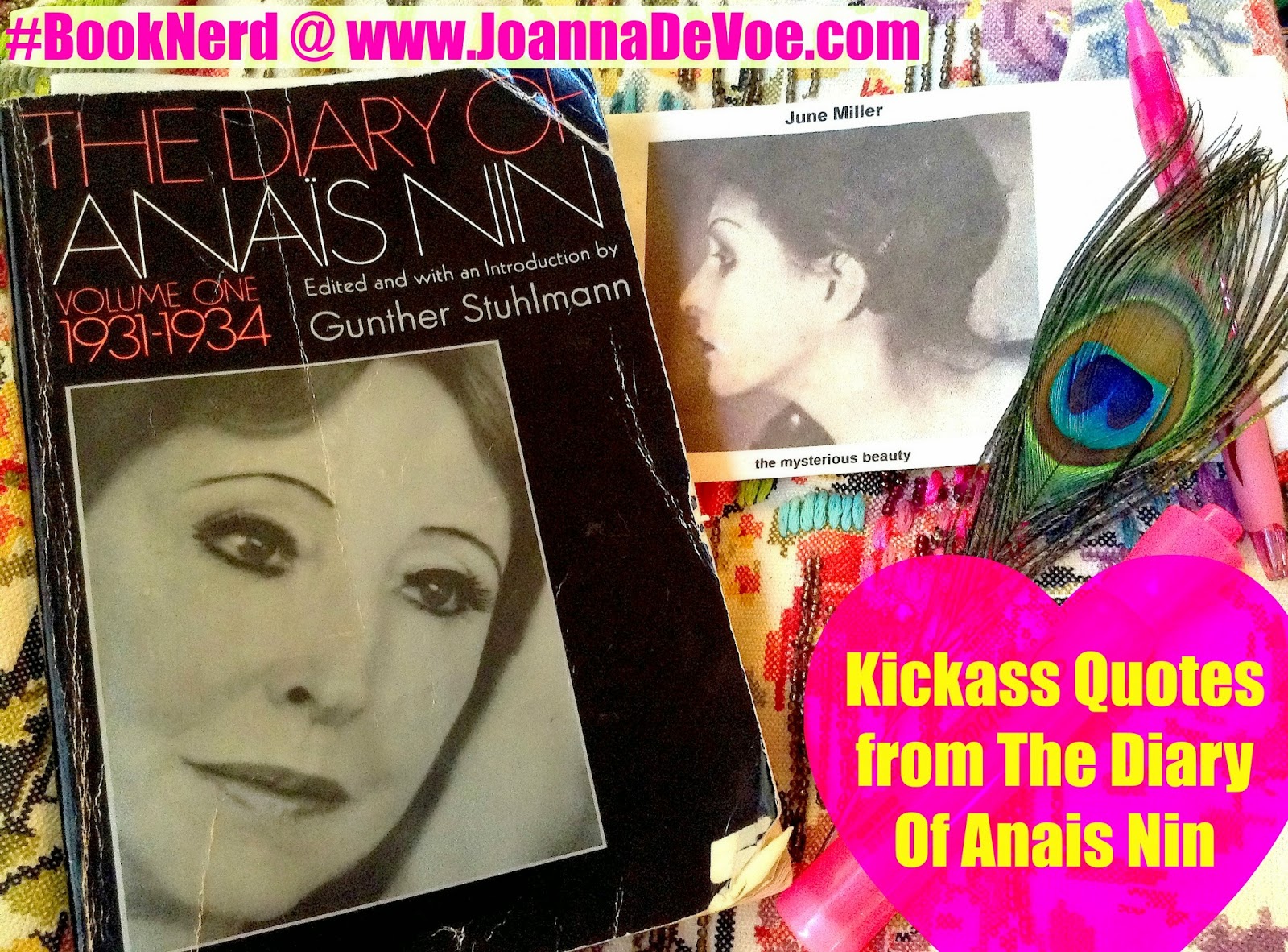 This, The Diary Of Anais Nin, Volume One, is perhaps the book I should have started this entire series with.

That's because it might be the most important book in my life as a creative person. It is the book that, as a life-long diarist, gave me permission to call myself a "writer".

I suppose I hesitated to share it here, because it is not a book for everyone.

It is a book for the young, possibly naive, dreamy, searching, romantic... a book that is right for a distinct but fleeting moment in one's development.

Anais Nin was a complicated woman.

She was feverish in her dedication to "tasting life twice", as she described the driving force behind her incessant diary-keeping, and she had the endearing knack for romanticizing just about anything, from the squeak of a gate to a certain shade of blue, then orange, then blue, and even the street prostitutes her beloved Henry (Miller) frequented.

She also romanticized her many infidelities, including an incestuous relationship she had as an adult with her own father, and spent her later years as a bigamist, deceiving two different husbands, one on each coast, into carrying on in marriages they believed to be exclusive.

And yet- she somehow managed to win intense devotion and unflagging loyalty from these men and just about everyone with whom she was engaged with intimately, including her legions of fans.

I suppose that what stands out for me, when I step back from the prism that was Anais Nin, is her courage to be known, flaws & all, and to explore every crevice of life with the gusto of a true artist.

She experimented with unconventional writing structures, championed the work of her fellow artists, explored many taboo ideas, including her own sexual curiosity, and was generous in her portraits of her many friends & lovers.

She reveled in the beauty, intellect, and style of other people, and she loved to enhance & explore her own.

She was, from my limited perspective, a hedonist with a feel for the spiritual, tapped into the creative impulse of all things, as well as an early explorer of clinical psychology, which, by most accounts, she probably needed.

In some strange, alternate reality, she feels like my friend, a very special friend, who I may have outgrown on some levels, but, because of the pivotal nature of our relationship, will always stay dear to my heart...

★ "How I spent my life developing myself, training myself, tutoring myself, setting myself difficult things to do, critical of my conduct, from childhood on, as if I had taken on my absent father's role which was that of a perfectionist. Self-appointed tasks, self-created goals." -Anais Nin

★ "There are experiences I shy away from. But my curiosity, creativeness, urge me beyond these boundaries, to transcend my character. My imagination pushes me into unknown, unexplored, dangerous realms." -Anais Nin

★ "This diary is my kief, hashish, and opium pipe. This is my drug and my vice. Instead of writing a novel, I lie back with this book and a pen, and dream, and indulge in refractions and defractions, I can turn away from reality into the reflections and dreams it projects, and this driving, impelling fever which keeps me tense and wide-awake during the day is dissolved in improvisations, in contemplations. I must relive my life in the dream. The dream is my only life." -Anais Nin 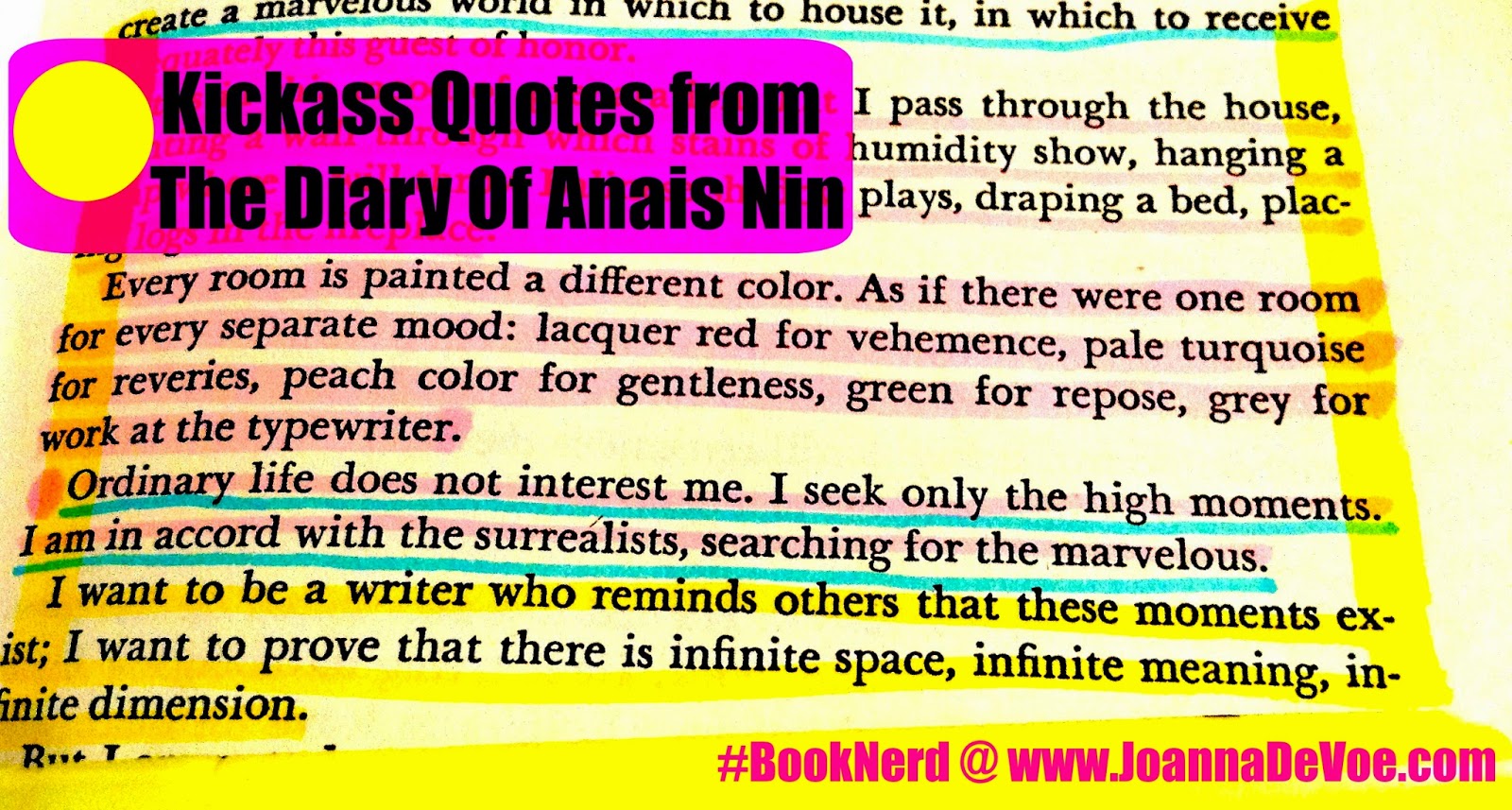 ★ "I did not follow fashions. I did not wear neutral colors, neutral suits, plain or homely or nondescript things. I wanted striking clothes which distinguished me from other women. Costumes added to my confidence..." -Anais Nin

★ "Idealism is the death of the body and of the imagination. All but freedom, utter freedom, is death." -Anais Nin

★ "For jaded people, the only pleasure left is to demolish others." -Anais Nin

★ "Nobody knows what a magnificent prey I was for Christian legends, because of my compassion and my tenderness for human beings. Today it divides me from enjoyment of life." -Anais Nin

★ "I don't really want to become normal, average, standard. I want merely to gain in strength, in the courage to live out my life more fully, enjoy more, experience more. I want to develop even more original and more unconventional traits." -Anais Nin

★ "I enlarge and expand my self; I do not like to be just one Anais, whole, familiar, contained. As soon as someone defines me... I seek escape from the confinements of definition." -Anais Nin

★ "She is bizarre, fantastic, nervous, like someone in a high fever. Her beauty drowned me." -Anais Nin

★ "When your beauty struck me, it dissolved me. Deep down, I am not different from you. I dreamed you, I wished for your existence. You are the woman I want to be. I see in you that part of me which is you." -Anais Nin

★ "I sense an intelligence rendered clairvoyant by feeling. I sense an artist." -Anais Nin

★ "He is a man whom life intoxicates, who has no need of wine, who is floating in a self-created euphoria." -Anais Nin 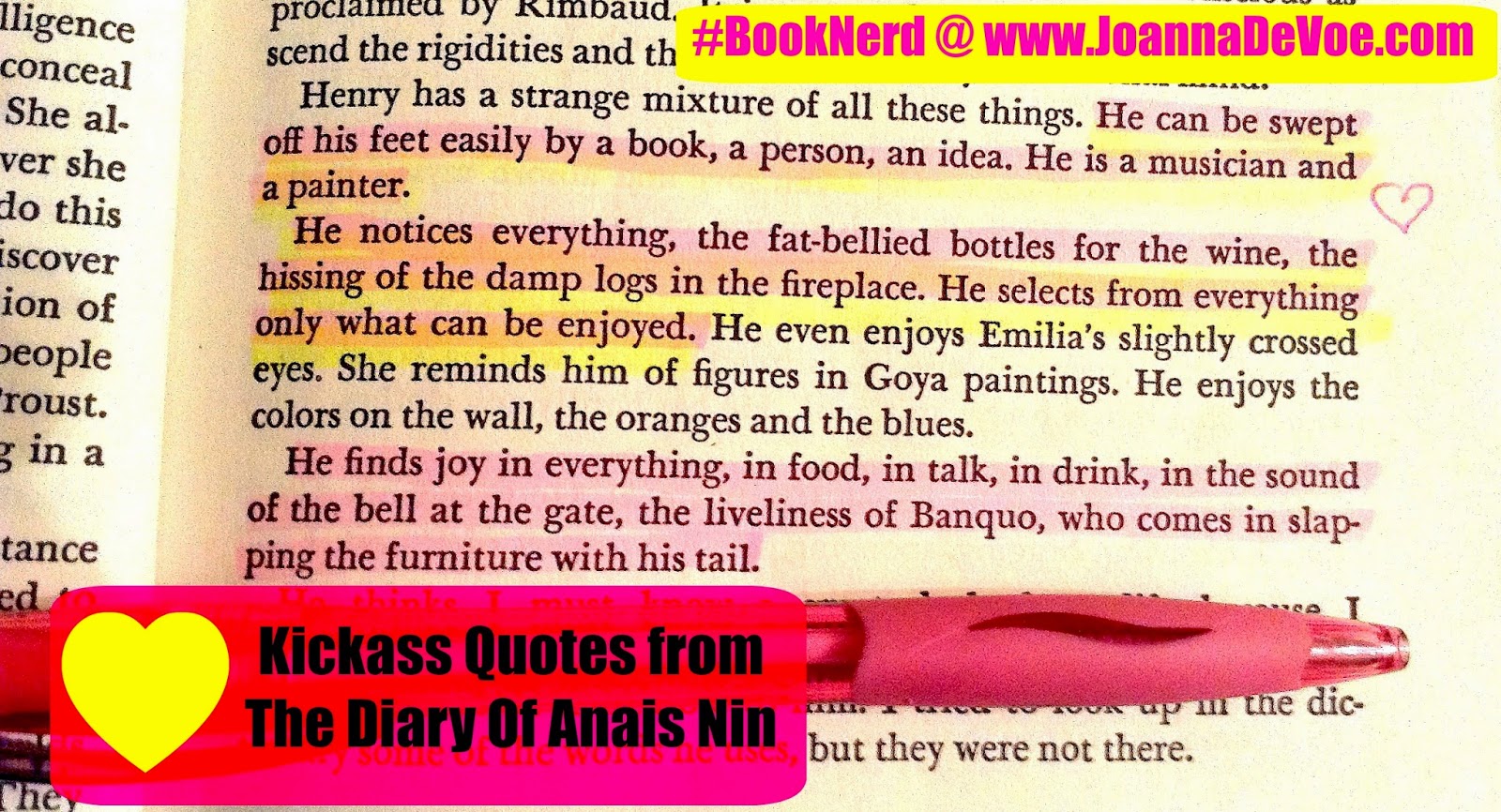 ★ "The little details which make joy. They are not important in the world of ideas, they only count in life for pleasure." -Anais Nin

★ "I went to sleep that night thinking of God, feeling that I was falling asleep in the bower of heaven. Feeling taken up in huge arms, yielding to a mysterious protection. The moonlight shone in the room. Heaven was a bower, a hammock. I swung in infinite spaces, beyond the world. Slept inside of God." -Anais Nin