I recently had the opportunity to pick the brain of someone who works in the publishing industry and has had a hand in helping MANY new authors find the agent of their dreams & land one of those infamously hard-to-land traditional publishing deals.

Do I need to tell you how excited I was about this?

I was also nervous.

I knew that my time with her was limited, and I wanted to ask a quality question. So- I asked a question that has plagued me for years.

And- here's the thing, I KNOW this question is the mark of an amateur, but it plagues me none the less, and I just had to ask...


What if someone steals my idea?!

This is a question born of equal parts naivete and arrogance, both of which you probably have to have in spades to write your first novel...

It's naive, because- you have to put your ideas out into the world if you want them to eventually reach the public. And...

It's arrogant, because you are assuming that your BiG FAT iDEA is so damn awesome that anyone who hears mere mention of it will immediately lose all scruples.

And hey- who knows? Maybe it is.

I certainly think that of MY BiG FAT iDEA, which is why I couldn't resist asking that age old question that just about every writer, artist, inventor, entrepreneur has grappled with at some point...


What if someone steals my idea?!

What if someone steals your idea? What then? What will you do?

The thing about MY BiG FAT iDEA is that it is high concept.

"High concept" means that it is easily pitched in one or two sentences. It's catchy and basically sells itself... or not. In Hollywood high concept ideas are how summer blockbusters get made.

So- that's good, right? From a sellers standpoint?

Or is that just a story that I tell myself? 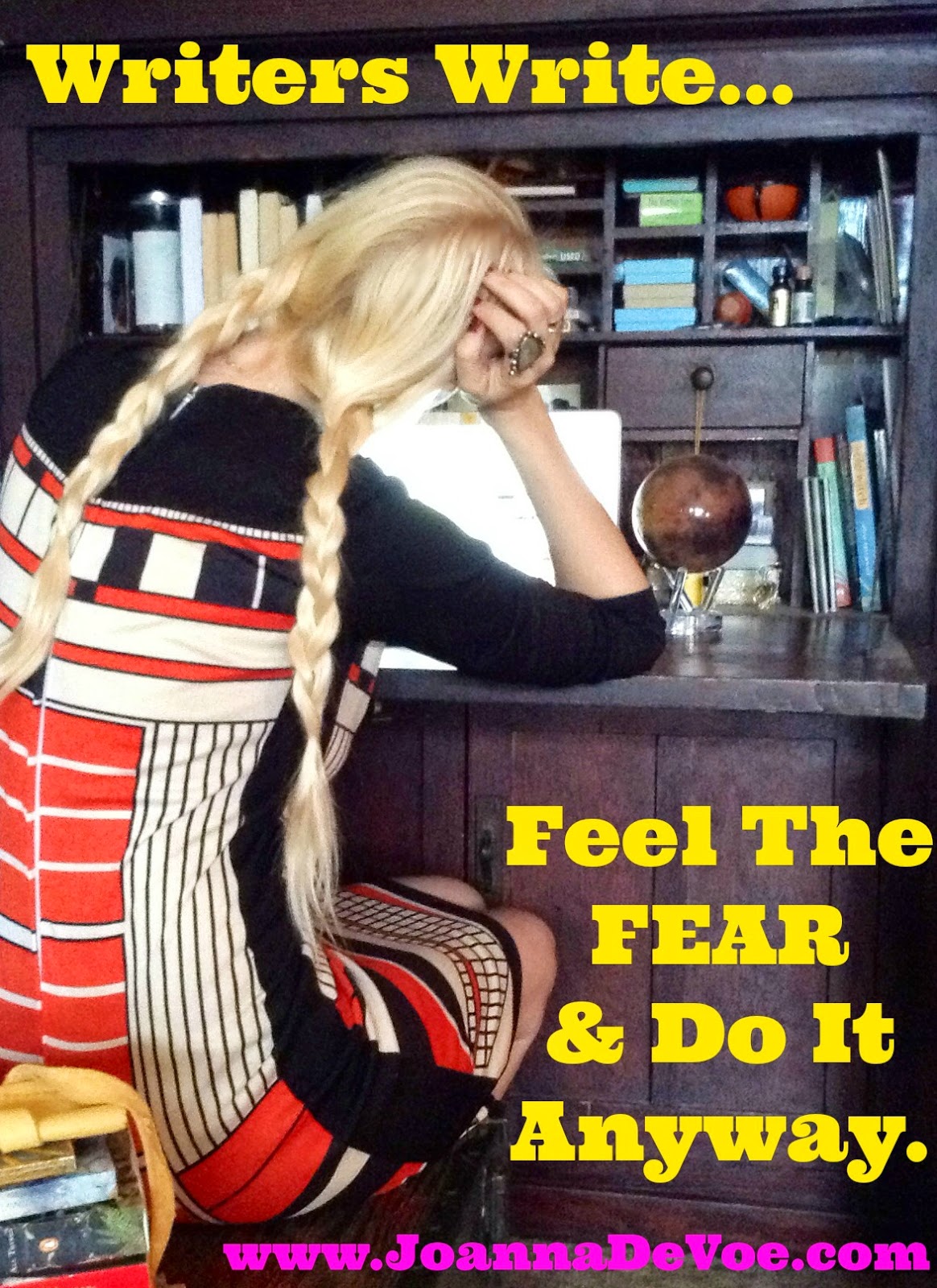 When I asked my question of said publishing expert, she was super kind & hip to my cause, but she also said that ultimately I'm going to have to take the risk, put it out there, and trust that it won't get stolen.

She added too that, "Hey- and if it does get stolen, just know that there are plenty of ideas where that came from!"


Doesn't she know that I've spent YEARS writing this thing?

That it's NOT just an idea?

It's hours, weeks, months & months of time and dedication...

I will die, like absolutely D-I-E if that happens to me...

That is what my special brand of FEAR looks like. But you know what?

FEAR is a liar.

I know this in theory, and I am working on knowing it in practice, especially when it comes to MY BiG FAT iDEA.

FEAR thinks it knows everything, and that everything is doomed. FEAR thinks it's protecting you from something, when it's really just holding you hostage. And- worst of all- FEAR feeds on itself, which creates a never ending cycle of more FEAR.

This is how novels don't get written.

This is how ideas don't get shared.

It's why you never asked that cute guy out on a date or took a chance and moved to the big city to pursue that dream or out into the wilderness to pursue that other dream...

The good news is that it doesn't have to be that way, and you always have a choice.

FEAR can only carry on like the freak it is if you CHOOSE to let it, and the antidote to FEAR is (drum roll please)... LOVE.

In every situation this is true.

You can choose FEAR or you can choose LOVE, but Life is going to happen regardless, and the way you choose to perceive Life is almost entirely responsible for your experience of it.

So yeah- okay- I will finish this novel in LOVE.

I will do it for the LOVE of writing and not out of FEAR of being beaten to the punch.

And- I will eventually share MY BiG FAT iDEA with potential agents & publishers in that same Spirit of LOVE.

I also want to make it clear that this post is NOT about writing a novel.

It's about the way you approach anything.

Perhaps tarot would be a more Universal way to get this point across?

Someone in the private Facebook group for PSWOTY just shared a tarot spread that she did for Imbolc, as well as the fact that she was none-too-thrilled with the perceived outcome.

To be honest, I don't blame her. By the usual standards, it wasn't the most promising group of cards.


But- my feeling is that your reading is largely determined by whether or not you are seeing it through the eyes of LOVE or the eyes of FEAR.

And- just to reiterate my point- this is true of everything, tarot readings included... 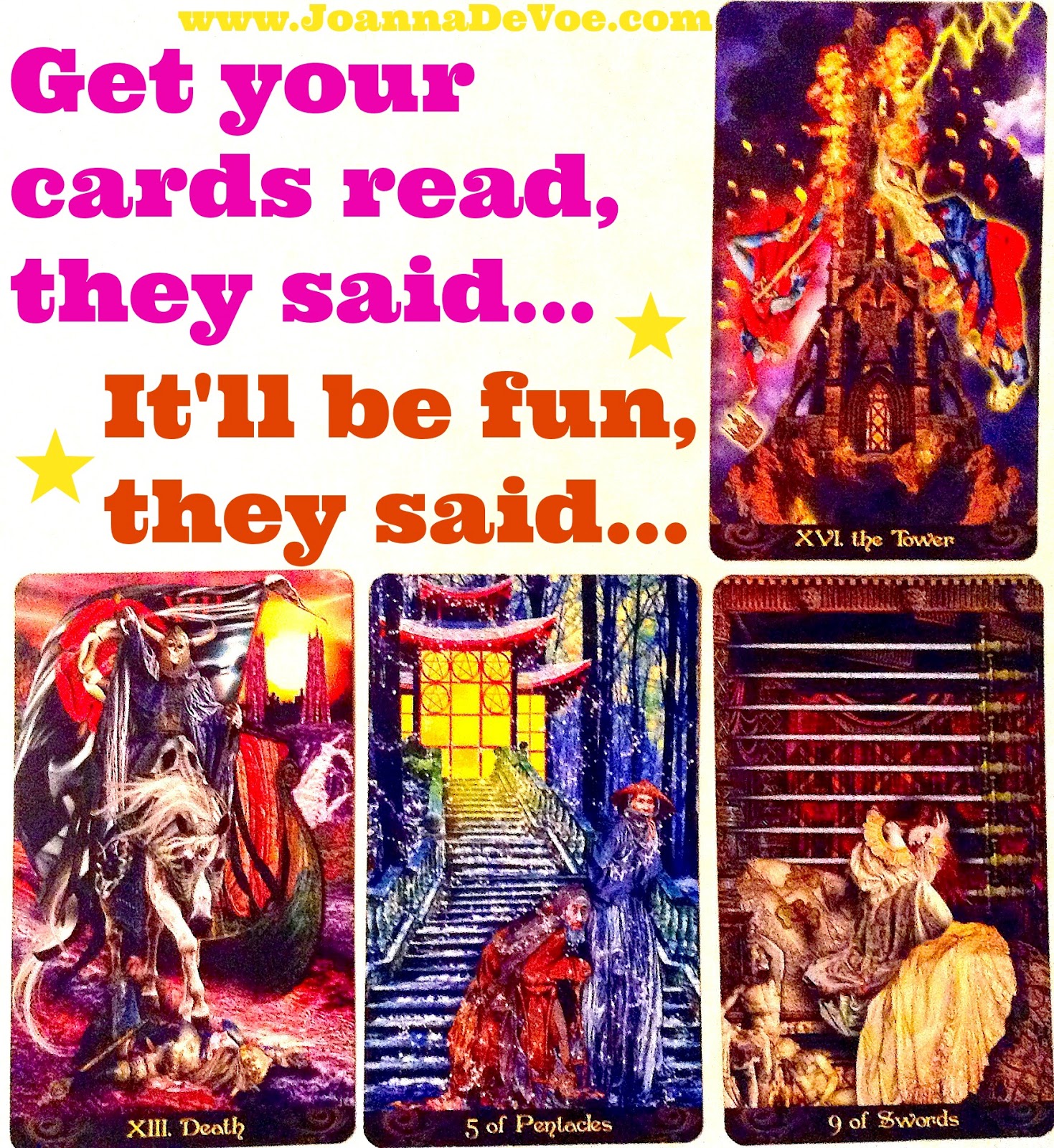 The Tower is my personal "Card Of Terror", as I sometimes call it, and, I ain't gonna lie... when that sucker comes up in a reading, it sends tiny shivers of Oh-Hell-No up & down my spine.

I've had some crazy-unpleasant Tower experiences in my day, so I've grown downright superstitious about this card.

However- I am working on changing that by taking my own advice here and choosing to see it through the eyes of LOVE.

Sooo... What if the Tower were my friend? What if it was actually looking out for me? What would it have to say then?

I think it would say something like, "You really need to take better care of yourself, Jo. It's time to set yourself free, and that inevitable ending that you've been resisting for far too long? You should end it now with grace before it ends itself in a much less dignified way. Liberate yourself. And do it gently. Choose LOVE. Or life will choose for you."

Do you have a card that you find extra spooky?

What kind of stuff does it bring up for you?

If you looked at it through the eyes of LOVE, what kind of message would it hold?

I really enjoy asking questions like this & looking at things from a new, more empowering perspective, and I hope that- in presenting this whole idea of FEAR vs LOVE here today- I have encouraged you to do the same.

★ Feel FREE to share any related thoughts in the comments section down below. I always get such a kick out of seeing YOUR take on things...