Sexy Butt Jeans & The Magick Of Belief... Go Confidently in the Direction of Your Dreams!!!

I grew up believing in a magick man named Jesus Christ, and- because I believed with my whole heart... miracles happened!

You may have had a similar experience growing up believing in Buddha, Krishna, Muhammad, Santa Claus or... witchcraft!

That's because the key to experiencing miracles and/or creating real magick is belief.

Belief comes in a wide variety of packages, but it is potent regardless of how you wrap it.

You may think this statement makes me a disrespectful, irreverent subversive, but... it's what I believe now.

Which just goes to show you that beliefs can change, because there was a time I would have believed that a statement like that could only be made by a disrespectful, irreverent subversive... and one who is going straight to hell at that!


The secret to performing any kind of magick, call it miracle-working or Law Of Attraction, is confidence, and confidence is really just a solid form of belief.

Furthermore, what is true of magick is true of any kind of deliberate creation.

You want to find true love? Say it with me now...

You have to be confident.

You have to believe you are worthy of true love.

For every one of these scenarios, sex, money, love (The 3 Big Desires that send people running to the local witch), humans have developed myriad tools & tricks for building confidence.

That is why we invented sexy butt jeans!!! 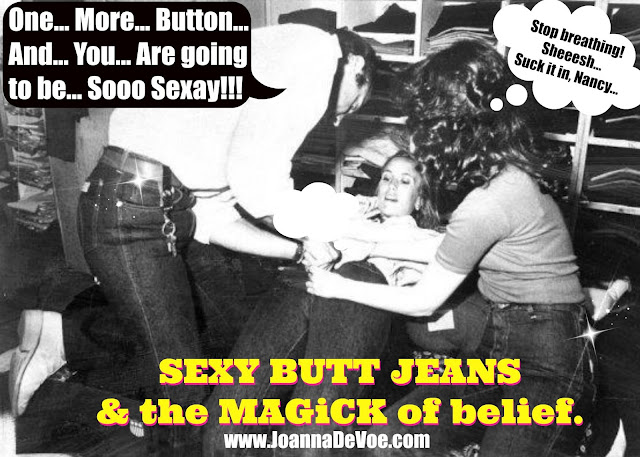 So- when I say that tools like the athame or wand or elaborate group rituals are not necessary for performing magick, I don't mean to imply they are pointless.

I'm NOT arguing against the sexy butt jeans...

I'm actually saying the opposite.

If the sexy butt jeans work for you, wear em! And- if they don't, find something that does.

There is power in superstition.

There is power in illusion.

There is power in religion... for those who believe.

Without it, your magick is useless.