There are many ways to write a screenplay, craft a novel or even author your own life...

Using the principles presented in Story by Robert McKee has helped me do all of the above in a manner I find endlessly engaging.

For me, it's all about the way structure sets you free and how character under pressure is revealing.

There are people who say that they write by the seat of their pants and that this book is too focused on plot, whereas they are more interested in character development.

Whenever someone says that to me, I silently question whether or not they've actually read the book or tried any of the techniques it outlines.

This book will show you how careful plotting sets up tension in a way that forces characters to make choices that expose what it is they truly value and who they are beneath the surface.

They're not just hanging out, moving from whim to whim, and trying to drum up emotion where there is none. They're acting and reacting and struggling to keep up with the demands of true cause and effect, which is what a life that is fully lived will do for you, as well.

I will give you fair warning here now in saying that my enthusiasm for this book does not denote it's end-all-be-all status as The One True Way...

It's just the way for me, and I think that, if you're a creative person who uses writing or story-telling in any facet of your life, biz or magick, it's worth playing around with to see how it works for you... 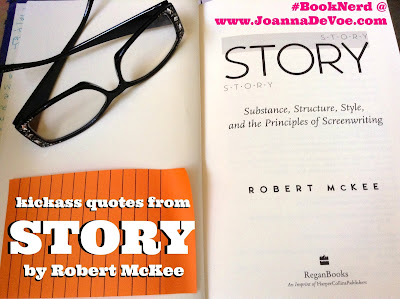 ★ "Your intellectual life prepares you for emotional experiences... The two realms influence each other, but first one, then the other. In fact, in life, moments that blaze with a fusion of idea and emotion are so rare, when they happen you think you're having a religious experience." -Robert McKee

★ "An unconscious desire is always more powerful and durable, with roots reaching to the protagonist's innermost self." -Robert McKee

★ "You must doubt appearances and seek the opposite of the obvious. Don't skim the surface, taking things at face value. Rather, peel back the skin of life to find the hidden, the unexpected, the seemingly inappropriate- in other words, the truth." -Robert McKee

★ "What seems is not what is. People are not what they appear to be. A hidden nature waits concealed behind a facade of traits. No matter what they say, no matter how they comport themselves, the only way we ever come to know characters in depth is through their choices under pressure." -Robert McKee

★ "Pressure is essential. Choices made when nothing is at risk mean little." -Robert McKee

★ "...the measure of the value of any human desire is in direct proportion to the risk involved in it's pursuit. The higher the value, the higher the risk." -Robert McKee

★ "True character can only be expressed though choice in dilemma. How the person chooses to act under pressure is who he is- the greater the pressure, the truer and deeper the choice to character." -Robert McKee

★ "...decisions are far more difficult to make than actions are to take. We often put off doing something for as long as possible, then as we finally make the decision and step into the action, we're surprised by it's relative ease. We're left to wonder why we dreaded doing it until we realize that most of life's actions are within our reach, but decisions take willpower." -Robert McKee

★ "An emotion is a relatively short-term, energetic experience that peaks and burns and is over... The Law Of Diminishing Returns, true in life as well as in story, is this : The more often we experience something, the less effect it has. Emotional experience, in other words, cannot be repeated back-to-back with effect." -Robert McKee

★ "The art of story is not about the middle ground, but about the pendulum of existence swinging to the limits, about life lived in it's most intense states." -Robert McKee

★ "Reality is relentlessly ironic, and this is why stories that end in irony tend to last the longest through time, travel the widest in the world, and draw the greatest love and respect from audiences." -Robert McKee