BOOK NERD : Kickass Quotes From The War Of Art by Steven Pressfield + A Chat About Creativity vs Resistance... 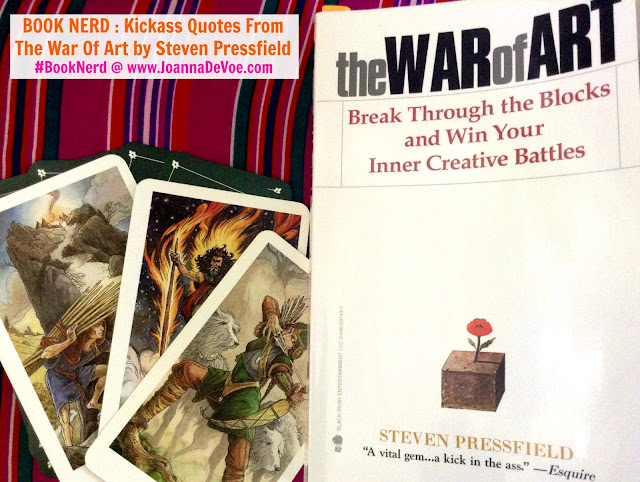 If you've ever tried to move beyond the perceived limits of your life to create something new...

Or if you've ever tried to fill a blank page or canvas with something beautiful...

Or to perform a real act of magick in the face of what has been formerly deemed impossible...

You most likely are familiar with the strange phenomenon known as self-sabotage.

Self-sabotage feels like there are two version of you living within. One version is inspired and positively brimming with delight at the possibilities, while the other is determined to snuff that inspiration out.

Steven Pressfield has a name for that lesser, more annoying version of yourself. He calls it The Resistance.

The Resistance is a fear-based creature.

It is easily distracted, seductive, confusing and committed to maintaining the dull but comfortable status quo.

It's also extraordinarily strong and clever as hell.

And- according to Mr. Pressfield, if it is to be defeated, a daily battle must be waged.

It's a good thing then that he wrote us a manual for not only waging that battle but emerging from it victorious.

The War Of Art is hugely popular for this reason, and it's a book I would happily recommend to any creative person experiencing their own pesky version of Resistance and a genuine desire to break free from it's sticky grasp...

★ "Never forget: This very moment, we can change our lives. There never was a moment, and never will be, when we are without the power to alter our destiny." -Steven Pressfield

★ "The more important a call or action is to our soul's evolution, the more Resistance we will feel toward pursuing it." -Steven Pressfield

★ "Most of us have two lives. The life we live, and the unlived life within us. Between the two stands Resistance." -Steven Pressfield 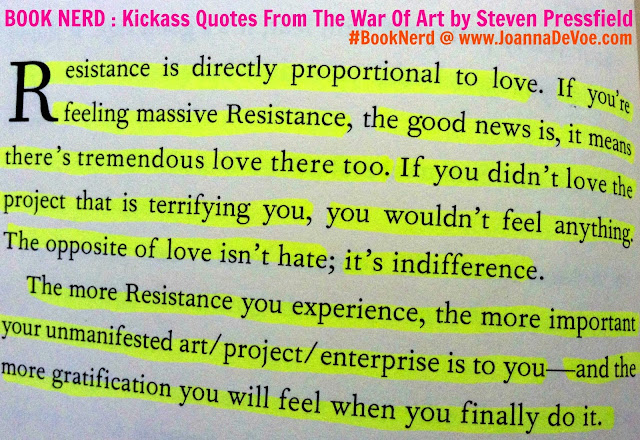 ★ "Artists have invoked the Muse since time immemorial. There is great wisdom to this. There is magic to effacing our human arrogance and humbly entreating help from a source we cannot see, hear, touch or smell." -Steven Pressfield

★ "We're never alone. As soon as we step outside the campfire glow, our Muse lights on our shoulder like a butterfly. The act of courage calls forth infallibly that deeper part of ourselves that supports and sustains us." -Steven Pressfield

★ "A victim act is a form of passive aggression... Casting yourself as a victim is the antithesis of doing your work. Don't do it. If you're doing it, stop." -Steven Pressfield

★ "Grandiose fantasies are a symptom of Resistance. They're the sign of an amateur. The professional has learned that success, like happiness, comes as a by-product of work." -Steven Pressfield

★ "Defeating Resistance is like giving birth. It seems absolutely impossible until you remember that women have been pulling if off successfully, with support and without, for fifty million years." -Steven Pressfield

★ "A pro views her work as craft, not art. Not because she believes art is devoid of a mystical dimension. On the contrary. She understands that all creative endeavor is holy, but she doesn't dwell on it. She knows if she thinks about that too much, it will paralyze her. So she concentrates on technique. The professional masters the how, and leaves the what and why to the gods." -Steven Pressfield

★ "The professional keeps his eye on the donut and not on the hole." -Steven Pressfield 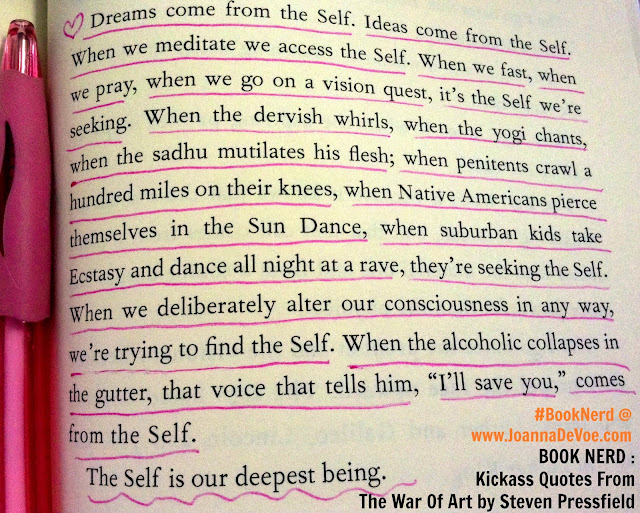 ★ "Angels make their home in the Self, while Resistance has it's seat in the Ego. The fight is between the two. The Self wishes to create, to evolve. The Ego likes things just the way they are." -Steven Pressfield

★ "Angels are agents of evolution. The Kabbalah describes angels as bundles of light, meaning intelligence, consciousness. Kabbalists believe that above every blade of grass is an angel crying 'Grow! Grow!' I'll go further. I believe that above the entire human race is one super-angel, crying 'Evolve! Evolve!'" -Steven Pressfield

★ "Every sun casts a shadow, and genius's shadow is Resistance. As powerful as is our soul's call to realization, so potent are the forces of Resistance arrayed against it." -Steven Pressfield

★ "To yield to Resistance deforms our spirit. It stunts us and makes us less than we are and were born to be." -Steven Pressfield

★ "Just as Resistance has its seat in hell, so Creation has its home in heaven. And it's not just a witness, but an eager and active ally." -Steven Pressfield

★ "The margins of the Self touch upon the Divine Ground. Meaning the Mystery, the Void, the source of Infinite Wisdom and Consciousness." -Steven Pressfield 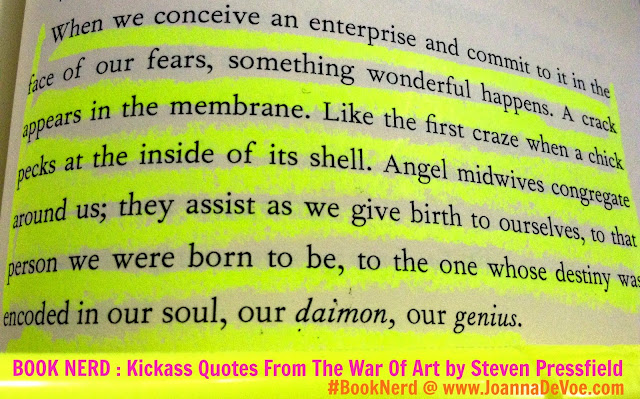 ★ "God is all there is. Everything that is, is God in one form or another. God, the divine ground, is that in which we live and move and have our being. Infinite planes of reality exist, all created by, sustained by and infused by the spirit of God." -Steven Pressfield

★ "We're all creative. We all have the same psyche. The same everyday miracles are happening in all our heads day by day, minute by minute." -Steven Pressfield

★ "The work comes from heaven anyway. Why not give it back?" -Steven Pressfield