In Defense Of Athena & The Women Who Love Her 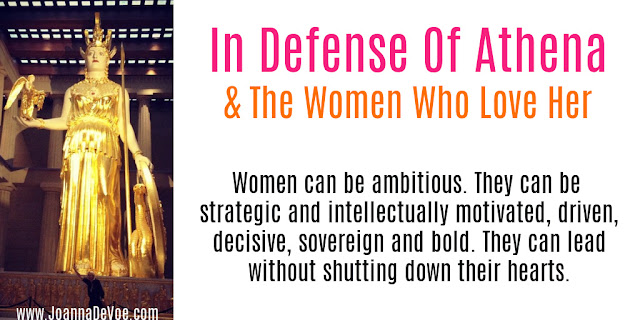 I do not worship the Goddess.

I am a pantheist who believes in a mysterious creative force known as the Divine or Source, sometimes called The Universe.

I also believe that men created God in an effort to better grasp and convey the Divine, that great ineffable mystery, to themselves and their communities, and thus many legends were born.

I feel the same is true of the Goddess, which may very well be an important, vital step in our ability to embrace our own Divinity as women, women creating the Goddess in our image as a path to healing a very old wound and ultimately touching the Divine within.

Because of these beliefs, it’s taken me a long time to connect to any kind of God or Goddess mythology in a way that resonates deep down inside.

What finally did it was a growing understanding of how archetypes represent various aspects of the human condition and a knee-jerk reaction that flared up when I began to research the mythology of Athena, the Greek Goddess of wisdom, craft and strategy.

Legend has it that Athena, patron Goddess of Athens, was a Goddess of war, born of a man's headache, and that she (on several distinct occasions) betrayed her own gender in favor of the patriarchy.

This, to me, smacks of revisionist history written from a patriarchal point of view. It also makes me want to do some revising of my own...

I do not believe that a real Goddess would do such a thing, certainly not a Goddess of wisdom.

A wise Goddess would most certainly act in her own best interest, as well as that of all woman-kind, of which she is an honored representative.

Would a Goddess known to be not only wise but protective in nature turn a beautiful young woman into a hideous monster with writhing, hissing snakes for hair and a petrifying stare as punishment for being the victim of rape, as Athena was rumored to have done to Medusa?

Or would she have empowered that woman with a shield of righteous rage?

If the head of Medusa was not an empowering, protective force, why would Athena wear a symbol of it, as she did, across her breastplate, the very piece of armor designed to protect her tender heart?

Is not a roaring lioness defending her cubs provoked by a tenderness of heart?

What of the mother who fiercely advocates for her special needs child or the brave girl who stands up for her bullied sister on the playground?

I also find it slanderous to suggest that attributes like rational thought or practical discernment are cold and unfeminine. These qualities exist innately in women. To label them otherwise is to diminish the full spectrum of femininity.

Women can be ambitious. They can be strategic and intellectually motivated, driven, decisive, sovereign, and bold. They can lead without shutting down their hearts.

A woman who embodies the Athena archetype might genuinely be turned on by ideas or the pursuit of higher education.

Her passion may be ignited in the planning phase of a big endeavor, creating structures or crafting a practical solution to a complicated problem.

She may feel called to battle for a cause that ignites her empathy or stirred into friendly debate for the pleasure of intellectual expansion.

The mind is her domain. Reason is her sword, but she wields it with care and grace.

She is not cold, robotic or cruel. She is powerful, precise and exacting.

When waves of emotion threaten to pull you under, leave you flailing for rescue and grasping for air, call on Athena.

She will lift you to safety.

Let her guide you to a new vantage point, a place where the broader view comes into focus and you can make calm, clear decisions based on logic and wisdom.

When I am looking to call up that kind of energy, I use a brief chant I created expressly for this purpose.

It includes Medusa (for the reason I mentioned above), as well as Minerva, Athena’s Roman counterpart, and Hypatia, who I have come to appreciate as a woman who dynamically realized the Athena Spirit.

It goes like this, and you are welcome to borrow it anytime you need a shot of inner-strength...

Athena, Sovereign Goddess, Queen Of Swords, Creatrix Of Wisdom & Strategy,
may your strength be my own.

Empowered by your indomitable Spirit,
I go, praising your name...

It is because I say so.

This may not be the Athena of history books, but she is the Athena who speaks to me, and I am happy to share her here with you.