POP WiTCH : The Magick Of Fall

I also equate this time of year with an explosion of pop culture. TV returns from it's summer hiatus, movie studios finally dish out the year's best award season fodder, Vogue unleashes it's impossibly thick September issue, and runways from New York to London to Milan and Paris are bedecked with future predictions for Spring. It's also a great time to tuck into a cozy piece of fiction.

These are some of the reasons that Fall is my favorite time of year. Of course, you most likely know by now that September is my Birthday Month- so that might also have something to do with it :O)

Here are some of the more secular pleasures of Fall 2012:

★ Live Tweeting can be annoying and embarrassing. However & every once in a while, it can also be a riot, as in the case of "Brad Does Acid", which reminds me of this little piece of work documented earlier this Spring... Poor Brian, when will he learn?

★ If your literary tastes run a bit more highbrow than live Tweeting, let me recommend Ann Patchett's "State Of Wonder". It's the story of a woman who works for a pharmaceutical company and is sent deep into the Amazon jungle in search of a doctor who is researching a potential fertility drug. Patchett's writing is gorgeous and this book has it's own special magick. Riveting... 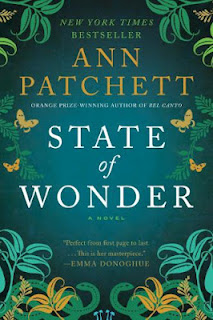 ★ The October issue of Marie Claire also makes for an engaging read. Yes, cover girl, Gwen Stefani is a goddess, but I'm actually talking about the stories, "Out Of The Box : A Story Of Survival" by Judy Dutton and "While You Were Sleeping : Totally Out Of Control On Ambien" by Kai Falkenberg.

I always enjoy reading Joanna Coles' editor's journal and am kind of bummed to see that she is leaving Marie Claire for Cosmopolitan. I haven't read Cosmo in YEARS (not really fond of the "How To Catch A Man" genre), but, as a fan of Ms. Coles, I'll at least pick up her first issue... 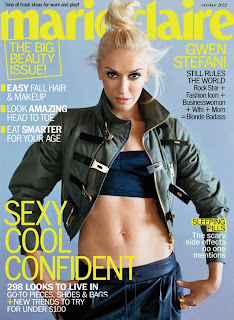 ★ I saw "The Master" last week and can honestly say that this is a movie that lives up to the hype. The reviews were almost too good, Paul Thomas Anderson is brilliant, and the cast is top notch, so I went in with exceedingly high expectations and was pleased to leave having had those expectations fulfilled.

The story centers around an unlikely relationship between a charismatic cult leader (Philip Seymour Hoffman) and a dangerous drifter (Joaquin Phoenix) and basically boils down to man's struggle to control his animal impulses. Good stuff...

★ This, according to me, has been the year of the truly original film. "The Master", as I just mentioned, "Moonrise Kingdom", "Bernie" and "Killer Joe" were all so fresh. Funny enough, Matthew McConaughey got to ham it up in the latter two, so I guess 2012 was also his year, especially considering the way he kicked things off.

In case you missed it, this Butch Walker video was released mid-January, and it's been something of a theme-song around my house ever since. The video is awesome and the song, as upbeat as it is, manages to hit a nostalgic nerve...

★ "Silver Linings Playbook" is apparently about two exceptionally good-looking people suffering from mental illness who manage to find each other... and dance. Actually, that dancing bit has me a little concerned about the plot, but the trailer is hilarious...

★ I predict that, by the strength of the cast alone, "Killing Them Softly" is going to make a killing at the box office. I saw it's trailer in a packed theater and the audience laughed & whooped it up in all the right places...

★ Great Expectations is one excellent piece of fiction. (Props to Mr. Dickens!) The story is captivating and timeless, while the characters are so richly drawn. I've read it several times and have never seen a movie adaptation come close to capturing it's depth or intensity. However, this trailer seriously gives me hope, and I'm actually quite giddy at the prospect of Helena Bonham Carter rocking out as Miss Havisham...

★ In the first edition of POP WITCH, I mentioned the best of NYC Fashion Week from what I'd seen so far. Here is the rest, as well as some entries from London, Milan, and Paris. And- now that we're more than three weeks into the proceedings (shouldn't we call it "Fashion Month"?)- some themes have emerged, metallics, muted and jewel tones, jumpsuits, short shorts, color blocking and print on print. It's also interesting to note how the overall color pallette is actually more indicative of fall... 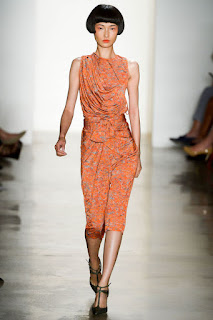 ★ You'd have to have teeny tiny boobies to get away with it, but I'm just crazy about the cut on this little black dress by Daks:

★There were a number of bold, color-blocked dresses in a variety of tasteful shapes at Roksanda Ilincic, and I certainly didn't mind the gratuitous use of my favorite color, orange(!): 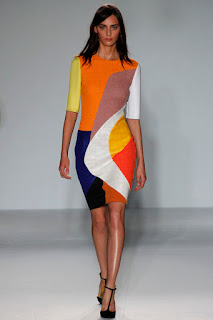 ★ Ethereal with an edge- that's how I'd describe Alberta Ferretti's oceanic display of richly aquatic blues and sandy, transparent nudes. This short set was the one casual note in an otherwise formal collection: 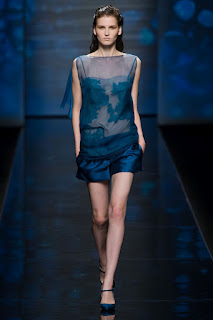 ★ Bottega Veneta is one brand that always leaves me lusting for the big bucks. Season after season, I am moved, and one day I hope to be able to actually buy something! This dress is so classic & chic: 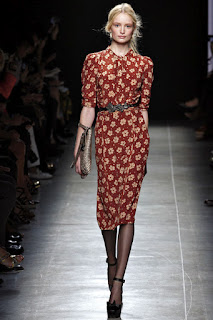 ★ Carven showed a fairly simple collection. The details are what made it special, peter pan collars, clever cut outs, and subtle moments of volume. I also enjoyed the pairing of maroon with an almost neon red and this easy, flattering dress, which is in such an unexpected fabric for spring: 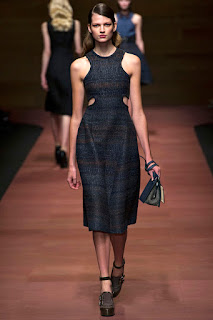 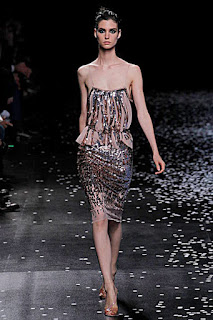 ★ Lanvin was, from beginning to end, tough, edgy, cool. There was loads of black, silky jewel tones, flashes of metal and the hard but sensual shapes fit for a Helmut Newton pic, circa 1981. Sooo kickass: 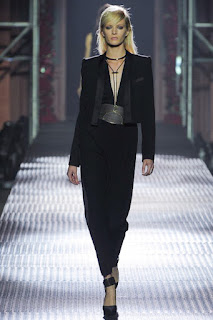 ★There are still quite a few collections left to show in Paris &, of course, some of the best, Chanel, Dior and Yves Saint Laurent, will be saved for last. So, for those of us watching, we've got something to look forward to!